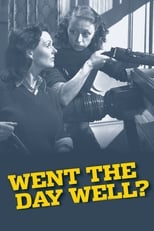 This is without question the finest Home Front picture made during the Second World War. Adapted from Graham Greene's short story The Lieutenant Died Last, it depicts the seizure of a quiet English village by disguised Nazi soldiers in league with local quislings with such plausibility that it must have chilled contemporary audiences to the bone. Those watching today will be similarly struck by the steel beneath the quintessential Englishness of the villagers. What makes this such compelling cinema for viewers decades later is the realism and restraint with which director Alberto Cavalcanti tells his tale and the naturalistic playing of his splendid cast.