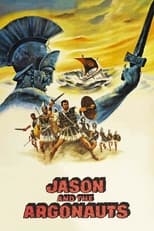 Ray Harryhausen, the grand pooh-bah of stop-motion animation, presents Jason and the Argonauts, which follows Jason's epic quest for the Golden Fleece. Harryhausen phantasms abound, including a multiheaded hydra, a gigantic living statue and a justifiably famous army of sword-swinging skeletons. Packed with old-fashioned matinee thrills, and includes an interview with Harryhausen, conducted by director John Landis.