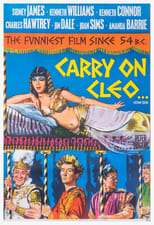 Mercilessly mocking Elizabeth Taylor's disastrous Cleopatra, this corking ancient history lesson was also filmed at Pinewood and sees the Carry On team at the peak of its powers. It's hard to know where to start lavishing the praise. The puns have never been better ("infamy, infamy, they've all got it in for me!") and the sets are positively luxuriant (and very familiar!). Amanda Barrie is exquisitely dippy in the title role, and Kenneth Connor and Jim Dale do well as the Britons in the imperial guard. But topping them all are Sid James's lecherous Mark Antony and Kenneth Williams's snivelling Caesar.