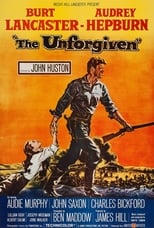 Not to be mistaken for Clint Eastwood's masterly epic, this is a handsome Texas-set western from director John Huston, based on a novel by The Searchers author Alan LeMay. Huston is particularly well served by Burt Lancaster, and the unusually interesting support cast includes two Duel in the Sun veterans, Lillian Gish and Charles Bickford. There's also the excellent Audie Murphy making a rare appearance in a big-budget feature - Huston had previously cast him in the lead for The Red Badge of Courage. Only Audrey Hepburn is badly cast, lacking credibility as the native American brought up by Gish with her three sons on a remote ranch. Superbly photographed by Franz Planer and with a fine Dimitri Tiomkin score, this film deserves to be better known - the racial issues it deals with are no less comfortable now than they were when the movie was made.