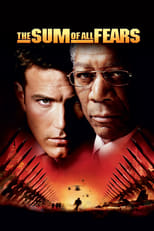 Why are three missing Russian nuclear scientists holed up in the Ukraine, communicating with neo-Nazis? CIA agent Jack Ryan (Ben Affleck) digs up more information than the U.S. government is willing to accept. As bombs kill thousands in Chechnya and the U.S., Ryan races against time to prevent all-out nuclear war. Based on the novel by Tom Clancy, this high-intensity technothriller co-stars Morgan Freeman.