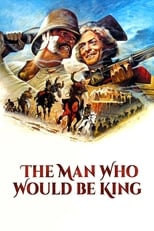 This colourful movie version of Rudyard Kipling's right royal 19th-century adventure stars Sean Connery and Michael Caine as the veteran army squaddies who bamboozle a remote mountain tribe in Afghanistan into accepting Connery's regal credentials. Greed and circumstances topple the comic elements of the tale into a serious fable about the vanity of human endeavour and the folly of imperialism, in keeping with Kipling's original story and the philosophy of director John Huston's greatest movies. Huston matches character to action in masterly fashion, aided by the brief bonus of an aloof commentary on the situation by Christopher Plummer, as Kipling himself. This is packed with sly dialogue and memorable scenes, topped off by a stirring score from Maurice Jarre.