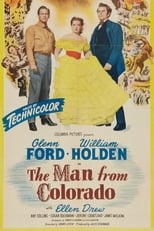 Before he adopted a crew cut for The Blackboard Jungle and went Method, Glenn Ford was a useful, though seldom more than mildly interesting, leading man. Except here, where, unusually, he portrays a sadistic military tyrant appointed as judge to govern Colorado. Ford's unstable character is confronted by a likeable hero in the shape of the pre-Sunset Blvd William Holden. The story by Borden Chase - he was author and co-screenwriter of Howard Hawks's Red River - can be read as an allegory of the brutalising effect the Second World War had on its returning veterans, and the insinuations are clearly there if you look for them.