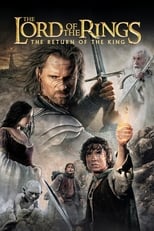 In the Oscar-winning final installment of the Lord of the Rings trilogy, Aragorn (Viggo Mortensen) is revealed as the heir to the ancient kings as he, Gandalf (Ian McKellen) and the other members of the broken fellowship struggle to save Gondor from Sauron's forces. Meanwhile, Frodo (Elijah Wood) and Sam (Sean Astin) bring the ring into Mordor, the dark lord's realm. This extended version adds 50 minutes of footage to the theatrical cut.