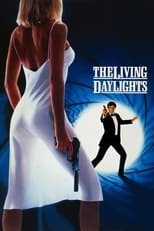 Timothy Dalton makes his suave and lethal debut as superagent James Bond in this turbo-charged action-adventure. This time, Bond's charged with protecting a Soviet general (Jeroen Krabbe) from a beautiful sniper (Maryam d'Abo). But after being used as a pawn in a fake defector scheme, Agent 007 must trek across the world to find the escaped general and stop a terrifying weapons conspiracy that may be linked to the Soviet military high command.