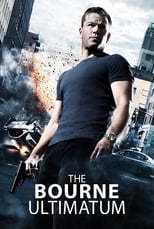 Matt Damon returns as trained assassin Jason Bourne in this third film based on Robert Ludlum's best-selling novels. This time around, Bourne travels the globe on a quest to reconstruct his past -- and thus clear the way for his future. As Bourne moves from Moscow to Paris and on to Madrid, London, New York and Morocco, he's joined by returning cast members Julia Stiles and Joan Allen as well as new co-stars David Strathairn and Paddy Considine.