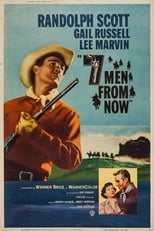 Ben Stride (Randolph Scott) used to be keeper of the peace when he was sheriff of Silver Springs. But since his wife's murder during a Wells Fargo office holdup, Stride has made it his mission to hunt down her killers and make them pay. When he crosses paths with scoundrel Bill Masters (Lee Marvin) and his cohort (Donald Barry), Stride gets closer to his mark -- but things are not what they seem in director Budd Boetticher's classic Western.