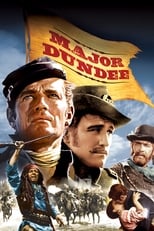 Offbeat western about a US Union officer determined to exact revenge on the band of Apaches who massacred a US Cavalry post. Short of men, he liberates a group of Confederate prisoners led by his former foe, a disgruntled captain, to hunt down the renegade Native Americans. Once in Mexico, however, tension mounts between the old enemies, exacerbated by their love of the same beautiful widow.