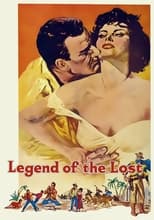 John Wayne stars in this epic Western famed for its stunning cinematography. Wayne is Joe January, a hard-drinking, hard-living guide hired to find his employer's (Rossano Brazzi) father and a legendary, long-lost treasure. The two men set out into the isolated wasteland of the North African desert accompanied by Dita (Sophia Loren), a sultry prostitute who drives the men crazy and comes between them even as they battle for survival.