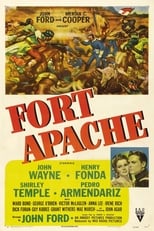 An arrogant cavalry colonel is sent to a remote Arizona desert outpost, which he considers an insult after his service in the Civil War. However, he is determined to show his heroism and plots to lure the local Apaches into waging war, despite the warnings of his lieutenants that such a battle cannot be won. John Ford Western, starring Henry Fonda and John Wayne, with Shirley Temple and George O'Brien.