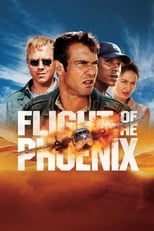 When a C-119 cargo plane full of oil workers crashes in Mongolia's Gobi Desert during a sandstorm, the survivors attempt to build a new plane from the parts they find in the wreckage, led by downed pilot Frank Towns (Dennis Quaid). The rag-tag group must work together in a desperate effort to stay alive and return to civilization. Giovanni Ribisi, Miranda Otto and Hugh Laurie co-star in this remake of the 1965 film that starred James Stewart.