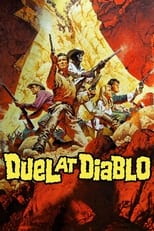 Co-producer/director Ralph Nelson's well-intentioned attempt to liberalise the western explores racist themes using an international cast. Unfortunately, it doesn't quite succeed, partly because the eclectic casting (including Swede Bibi Andersson and Brit Bill Travers) gets in the way of the authenticity. There is plenty of action, however, and a considerable amount of violence, as a cavalry troop escorting a wagon train of explosives out west is beset by hostile Apaches and riven by internal racial conflict. Sidney Poitier looks ill at ease, but a grim and quietly snarling James Garner provides the strength of the movie, making one wish he'd played more straight western roles before launching into a series of western spoofs. Nelson would repeat this formula to greater commercial success in 1970 with Soldier Blue, an even more explicitly violent movie.