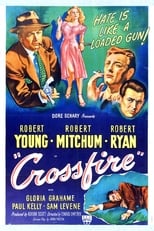 A homicide detective investigates the murder of a Jewish war veteran, becoming convinced the killer is one of a group of demobbed soldiers. An army sergeant is determined to root out the killer in his own ranks and prove the innocence of a friend. Drama set in the aftermath of the Second World War, starring Robert Mitchum, Robert Young, George Cooper, Robert Ryan and Gloria Grahame.