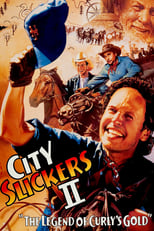 New York city boy Mitch discovers what appears to be a treasure map hidden in a hat left to him by a dead cowboy. Teaming up with his annoying brother, his best pal and the deceased friend's twin, Mitch heads for the Arizona Desert in search of a $1million cache of gold. Comedy Western sequel, with Billy Crystal, Daniel Stern, Jack Palance and Jon Lovitz.