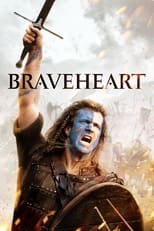 Enraged at the slaughter of Murron (Catherine McCormack) -- his new bride and childhood love -- legendary Scottish warrior William Wallace (Mel Gibson, who also directed the film) slays a platoon of the local English lord's soldiers. This leads the village to revolt and, eventually, the entire country to rise up against English rule. With vivid battle scenes and a heaping portion of legend, Gibson's epic won five Oscars, including Best Picture.