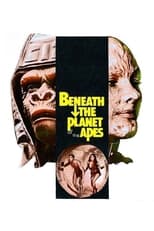 Astronaut Brent (James Franciscus) crash-lands on Earth and journeys to Ape City to rescue the vanished Col. Taylor. Meanwhile, simians and subterranean human mutants are bent on destroying each other and the world in this sequel to the original sci-fi hit. Charlton Heston reprises his role as Taylor, and Linda Harrison plays his mute mate, Nova, who accompanies Brent on his mission. Ted Post directs.