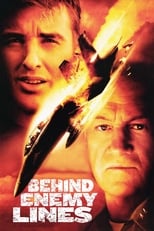 A reconnaissance pilot is shot down and becomes stranded in enemy territory after filming evidence of a genocidal massacre by Serb militia in Bosnia. The naval air commander for Nato forces in the Balkans defies orders by mounting an unauthorised mission to rescue him, while the airman faces a battle to stay alive as he is pursued by paramilitary forces. Bosnian War drama, starring Gene Hackman, Owen Wilson, Gabriel Macht and Olek Krupa.