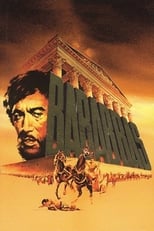 The condemned thief who was spared death on the cross alongside Jesus is troubled by the memory of Christ's crucifixion. His quest to make peace with his past leads to his conversion to Christianity, but he ends up fighting for his life and freedom in the gladiatorial arena. Biblical drama, starring Anthony Quinn, Jack Palance and Arthur Kennedy.