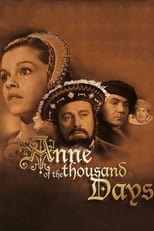 When King Henry VIII (Richard Burton) decides to divorce his first wife, Katherine of Aragon (Irene Papas), and marry the beautiful Anne Boleyn (Genevi&#x00E8;ve Bujold), he ignites religious and political drama that stretches from London all the way to Rome. This acclaimed film (which won an Oscar for Costume Design) focuses on the woman at the center of the affair to tell the story of one of the most dramatic chapters in English royal history.