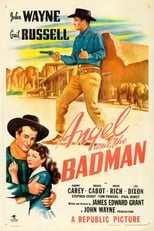 As Republic's one major star, John Wayne flexed his power to make a producing debut with this absorbingly offbeat western on which he promoted his writer buddy, James Edward Grant, to the director's chair (second unit specialist Yakima Canutt handled the striking action scenes). Wayne stars as the injured gunman nursed back to health by Quakers, who falls for the sensitive daughter of the house, Gail Russell. Can Wayne embrace their peaceful ways and avoid firing his six-gun, despite the continuing provocation of Bruce Cabot's bad guy? Fortunately, Grant's screenplay delivers some gratifying and ingenious twists en route.